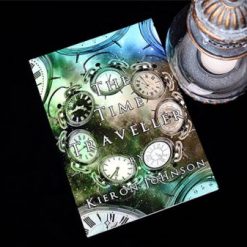 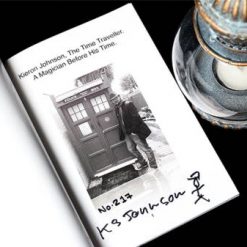 A tremendous book from one of magic’s great minds!

Kieron Johnson is a rising star in the magic world. He is a member of the 4F’s and is an AIMC member of The Magic Circle.

Kieron has lectured at The Session, Magi-fest, twice at The Magic Circle and is booked for the 2018 Blackpool Magic Convention. He receives standing ovations wherever he has performed or lectured.

But that’s not all, he has consulted on TV programmes with Troy and Ben Hanlin, advised David Blaine and has had numerous of his effects featured on TV all over the world and most recently one used to win The 2018 Magic Circle close-up competition.

He is obviously someone special to be in such demand. He has been highly influential in creating and inspiring the new age of magic we all now enjoy – the magic that moved away from conventional packet tricks and plots!

The Time Traveller is his first book in a series.

Volume 1 is a Limited Edition of 500 copies – all signed and numbered.

Take a step into the chaotic mind of Kieron Johnson, one of the most creative and off-the-wall performers you will ever meet.

You will find effects suitable for close up, parlour, and stage.

As you would expect, the ideas and concepts in this book are different from what you’ve seen in the past – you’ll learn unique effects and will come to understand why Kieron is quite simply «A Magician Before His Time».