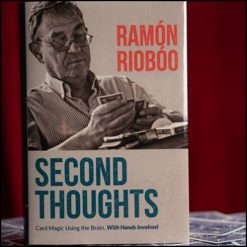 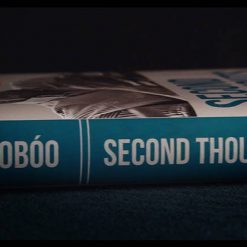 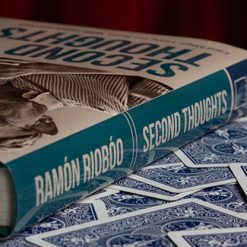 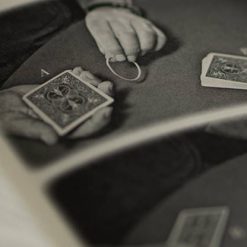 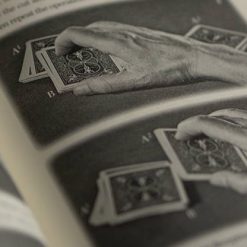 Ramon Rioboo has a reputation as an innovator of card tricks capable of fooling and entertaining the most knowledgeable audiences, whether magicians or the public. His methods defy the common expectations of mathematically based solutions. They are at the same time simple and sophisticated, often seasoned with a touch of sleight-of-hand. His constructions make the math and the manipulation invisible. They are pointedly designed to fool everyone, and they do. Riobóo delights in taking what spectators know or suspect and using it against their reasoning to leave them with a sense of pure astonishment.

While his first book, Thinking the Impossible, showed Riobóo’s ability to fool the best and brightest, all who have read Second Thoughts, his newest collection of card magic, judge it to be not a sequel but a step up to a new level of ingenious deception. It is a substantial gathering of truly baffling card magic, designed to be performed with an air of casualness that baits the trap and then springs it down hard onto your rational mind.

For those who have read Thinking the Impossible, Second Thoughts will delight with its advanced skulduggery. For those just meeting the card magic of Señor Riobóo, take a deep breath; you’re going to need it when his magic leaves you gasping in disbelief.

As befits a longtime friend of Juan Tamariz, Ramón Riobóo knows what makes a baffling card trick and how to manipulate minds as adroitly as hands do playing cards. When you open this book, be prepared to marvel at familiar effects that suddenly take a turn into the Twilight Zone, as well as effects you’ve never dreamed possible.

Riobóo’s magic is like no other. Procedures that appear totally innocent and unpremeditated conceal a level of deceit and cunning that produces events seemingly beyond explanation.

Second Thoughts is a generous second helping of Riobóo magic. In it he explains nearly fifty tricks and routines, gives a selection of his favorite tools for constructing marvels, and rounds things out with essays explaining his thinking and the theory behind his unique brand of card magic.

Second Thoughts will have you rethinking your approach to card magic and applying Riobóo’s ideas to make its effects entertaining, its methods impenetrable. Second thoughts for everyone!

After graduating with degrees in screen writing, direction and journalism, Ramón Riobóo settled into a twenty-year career as a writer and director for TVE (Television Española). He began to practice magic as a hobby in 1987. While his discovery of magic was later in life than usual, his deep passion has made up for lost time. His main interest is card magic and the principles of psychological deception. He is the recipient of the Ascanio Award (1992) and the First Prize in Card Magic from the XIX National Magic Congress (1993, Barcelona). Riobóo is also a member of the prestigious Escuela Magica de Madrid. He is the author of two books on card magic, Thinking the Impossible, being the first.

« His effects fool me, and his ingenious methods amaze me. » – R. Paul Wilson

« Ramon Rioboo constructs card tricks with so many devious and interlocking layers of deception you just can’t crack the code. » – Steve Beam

« Wow! This new book is an incredible compendium of some genius-level thinking about card magic. Ramon’s forte is methods based on hidden mathematical principles, cunning psychological ploys and crafty stacks. Add in several innovative new sleights, some inspired use of gaffs and some extraordinary yet commercial presentations and you have a collection of fabulous new material that will be used by magicians for decades to come. But this book contains so much more. The theoretical underpinnings of Ramon’s style and approach are thoroughly examined and explained. And keener students will be pleased to know that’s just the start; Ramon discusses much of his philosophical research and conclusions about what makes for strong magic, powerful tricks and successful magicians.
If you like fooling other magicians, then this book has your name written all over it. If you are a professional performer, there are at least half-a-dozen killer tricks that you’ll want to add to your repertoire immediately. And I finally have an answer to my question: ‘If Einstein had been into card magic, I wonder what kind of book he would have written?’ Now I know. Highest recommendation. » – Mark Elsdon

« Every card magician will be fooled by his creativity and deeper concepts and thinking about card magic. I suggest you get his book before you become fooled, fried and Rioboo’d by somebody else. » – Raj Madhok

« I was super impressed. Not just the volume of tricks (which there were a ton of!) but I found very often I was highlighting things throughout the book. Tools and insights within those tricks that I can apply to other areas. If you’re looking for a book with a lot of really great material plus a lot of nuances you can apply to other areas of magic that you do, check out Second Thoughts. » – David Corsaro 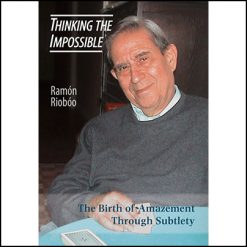