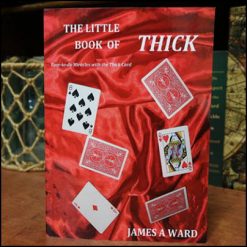 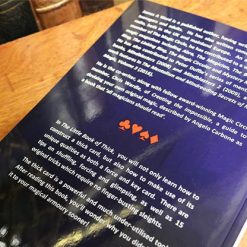 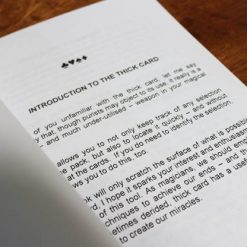 The Little Book Of Thick

Winner of The Magic Circle’s Cecil Lyle Award in 2015 and the Hoffmann Memorial Award 2018, James recently earned praise, along with his co-writer, the prolific Chris Wardle MIMC, for Creating the Impossible – the acclaimed work on how to devise and create your own magic.

In The Little Book of Thick, James turns his attention to a much-underused tool, the thick card.

After first explaining how to make your own thick card, James shows you how to locate, position, force, glimpse and shuffle the gimmick.

As well as describing 15 new effects, the book ends with a useful list of sources. Everything from books to DVDs – where you can learn more about the thick card – to a list of thick card tricks to be found in a range of works by magical creators as varied as Al Baker, Karl Fulves, Al Koran and Steve Bedwell.

Four Ace Assembly
After four Aces are lost in the pack, you proceed to produce them one by one, with the spectator successfully locating the final Ace.

Your Biggest Fan
A spectator shuffles the cards, then glimpses one which is lost in the deck. You fan the cards towards the spectator and, while looking away, push one card out of the fan. It’s the spectator’s selection.

Back from the Future
A remote viewing effect in which you successfully predict a number, a word and – finally – a playing card. (The spectator even shuffles the deck before making their choice.)

Impossibly Thick
Cards are shuffled and cut yet again – as in ‘Your Biggest Fan’ (above). You simply fan through the cards and produce your helper’s selection.

Impossibly Thick Revisited
A variation on the above in which you not only produce, but name in advance, a selection apparently lost in the deck.

Now You See It
A signed card is lost in the deck. A second person removes a card without looking at its face and you place it into your outside breast pocket so that the back remains in full view. When the cards are shown again, the signed card has vanished. It looks like your second helper has performed a miracle. With a snap of your fingers, however, you remove the card from your pocket to show that its face now reads ‘It’s Back in the Deck!’ The cards are fanned. One is face down. The spectator reaches in and removes it. It’s their signed card.

Inky Fingers
Claiming that you are able to tell the difference between each card because of the amount of ink on its face, have a card freely selected and lost in the pack. With your head turned away, fan the cards, touching the face of each one to feel the ink. Eventually you stop, and name the card out loud before pushing it from the deck and having the spectator confirm it is their card.

Finesse-timation
A card is chosen and lost in the deck. Informing your helper that you can often estimate where in the deck a card is – even after shuffling, and without knowing what the card was – you ask for a number between 1 and 10. A quick shuffle and cut and, when you count down to their chosen number, you also find their chosen card.

A Glimpse into the Future
A card is chosen and returned to the deck, which is well mixed. Despite the fairness of proceedings, your helper manages to find their own card after you apparently travel into the future, see the end of the trick, and arrange things accordingly.

Back to Back
A multi-phased pocket routine with a signed card that ends up back in the deck and magically reversed.

Weight for It
You identify the selection simply by weighing the cards in your hand, A new take on an old favourite.

Great Minds
Both performer and helper cut separate decks that have been well shuffled, yet both manage to cut to exactly the same card – the very same card originally chosen by your helper after which they shuffled it back into the deck themselves.

Stacked Mates
James’s take on Steve Bedwell’s ‘Stacked Thoughts’ – but without the need for a memorised deck or Faro shuffle. You find the mates of three cards freely chosen by your helpers.