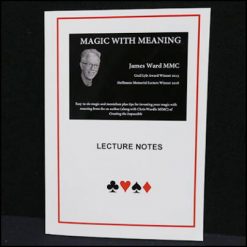 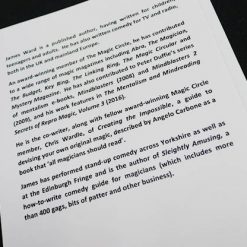 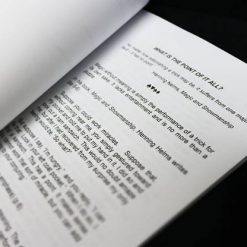 James Ward is a double-award-winning member of The Magic Circle and co-writer (along with Chris Wardle MIMC) of Creating the Impossible – the acclaimed work on how to devise and create your own magic.

In Magic with Meaning, James not only shares NINE new tricks, but also his ideas on how to invest your magic with meaning.

We all own dozens – if not hundreds – of tricks, and often perform them straight out of the box, with little or no thought. At best, we follow the standard patter provided. Magic with Meaning will, hopefully, get you thinking about not just what you present to your audience but how you present it. If you already own Creating the Impossible, these lecture notes will hopefully nudge you a little further along the road to truly becoming a unique magician.

As well as tips on investing your magic with meaning, the booklet contains the following easy-to-perform routines, each of which is presented in a way that will hopefully get you thinking about how to weave stories around your own magic:

Blind Fate
A light-hearted triple forecast in which, having predicted a helper’s choice of silks and cards, a previously empty box is shown to contain their gift for taking part – a chocolate bar also chosen by them at random. The Universe often does move in mysterious ways!

Always Hold On To Your Dream
Through a series of different card productions, your helper is given a lesson on the importance of holding on to their dreams. After finding their own card (and dream) again and again, it finally vanishes from the deck (with no complicated sleights or palming) only to reappear in an envelope that has been in full view throughout.

Vote for Me!
A ‘Truth and Liar’ effect, themed around a General Election and described by Mark Elsdon as ‘hands down the absolute BEST presentation for the liar/truth teller plot’. He liked it so much, he was kind enough to give it a mention in his Hidden Gems, Volume 3.

Business Design
Using an easy-to-make gimmick, you’ll be able to transform your business cards into a mind-reading tool and perform one of the easiest drawing duplications ever.

My Big Night Out
‘Sam the Bellhop’ is a fabulous story-telling routine with cards. Here, you can tell your own – very British – story about a fun evening out at your local night club, where music is very much the order of the day!

Name That Tune
Another musical treat. From a list of more than 20 songs, your helper makes a completely fair and random choice – but one that you are very easily able to divine.

Basic Instinct
In this stage/cabaret mind-reading routine, your helpers are shown lists of some of the best – and worst – people from history. Everyone from Vlad the Impaler to Nelson Mandela. Four helpers make a free choice of a ‘bad’ person while a fifth chooses someone more noble. Every choice is a free one and, having written them down, they are sealed in envelopes (handed out by an audience member, not you) which are then mixed up. The helper who chose the ‘good’ person now chooses one of the five envelopes, while you write something down on your pad. Not only do they somehow locate their own choice, you now turn your pad around to show that you have successfully read their mind and knew who they would choose.

The No Memory Diary Trick
Yet another variation on a well-known theme. A date in a diary is chosen, and the card on that date remembered. Your helper removes their chosen card from the deck – but in their imagination only. When the deck is shown again, their card is the only one missing. They then mime returning their card to the deck and, when spread again, their card is miraculously back. This trick was originally published in The Magic Circular and came about after James had corresponded with the late, great Simon Aronson who kindly gave permission to use one of his fabulous ideas in it.

The Wife Always Knows
A light-hearted routine in which a wife finds her husband’s freely chosen card, despite him trying to hide it. The trick can be adapted for other ‘couples’ (parent/child; teacher/pupil etc) and demonstrates not only the value of introducing humour into magic, but also the importance of making the magic itself have a reason for being performed. Again, Mark Elsdon was kind enough to say that, ‘I can imagine at the right moment, it would be a killer. It’s gone into my back pocket of things to pull out one day when the moment is right.’