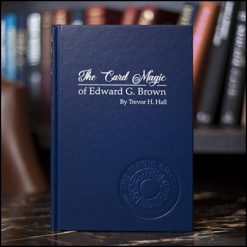 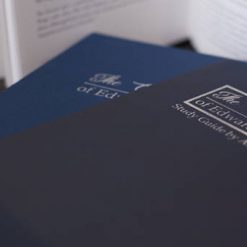 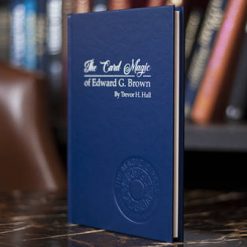 The 1930s and 1940s were exciting times for card magicians, and while many magicians actively performing during those times have become lasting names, Edward George Brown was sadly not one of them. Luminaries from John Ramsay, Dai Vernon, and Charlie Miller wrote that Edward G. Brown was one of the finest sleight-of-hand artists of all time, yet his presence is all but forgotten, almost certainly due to the scarcity of his astounding book, The Card Magic of Edward G. Brown.

Working with The Magic Circle, Andi Gladwin has reproduced this rare book, and combined it with a thorough analysis of Brown’s life’s work in a separate “study guide.” The two books come packaged in a beautiful collector’s slipcase, raising the standards of how a magic book should be produced.

Brown’s book is a view to card magic of a different era. The book contains an equal mixture of parlor and close-up card magic: some easy, and some difficult. Brown was one of the earliest proponents of “naturalness” and “uniformity of action,” and much of the material is as relevant and interesting today as it ever was. Amongst the many treasures created by Brown, you’ll learn the trick that Andi Gladwin believes is one of the best-constructed card tricks of all time; the transposition of a genuinely freely thought-of card from one spectator to another. As you read each trick, you can use Andi’s study guide to learn more details about the method. On occasion, you’ll even learn extra handlings (including a previously-unpublished Dai Vernon effect).

Books like this come along all too rarely; a sought-after text, analyzed by an expert in that area. If you appreciate fine card magic, this two-book set deserves a place on your shelf.

“Vanishing, Inc.’s gorgeous new edition of the excellent and previously highly sought (read ‘expensive’) classic Card Magic of Edward G. Brown is special in every respect. The card magic in this book is still very worth your study. Brown was a remarkable mind whose thinking was respected by Dai Vernon and many others. This reincarnation is beautifully done in all respects, and Andi Gladwin’s accompanying notes give new and welcome insight into the material. I can’t think of a single reason not to recommend this work most highly.”
– Stephen Minch

“When I first began to study card magic seriously, Bob White taught me his handlings of two effects by Edward G. Brown: ‘The Twelve Card Thought Transition’ and ‘The Spelling Trick.’ Versions of these two excellent performance pieces remain in my repertoire to this day. Now, thanks to Vanishing Inc., Brown’s material is available to another generation of students. Their reprint of The Card Magic of Edward G. Brown is not merely a collector’s piece that will look [great] on the bookshelf; more importantly, Andi Gladwin’s insightful notes make it an example of the kind of scholarly work our magical literature deserves.”
– Jared Kopf

“A beautifully produced tribute to Edward G. Brown’s classic text. Andi has done a wonderful job bringing it back to life.”
– Scott Penrose, President of The Magic Circle

“What a fantastic book about the life of Edward G. Brown. Not only do you get insights into his life, but also, you’ll get his take on classic card tricks. This book contains some extremely clever ideas and the thinking and theory behind those ideas. And, it’s beautifully written and designed. Highly recommended.”
– Jason Ladanye