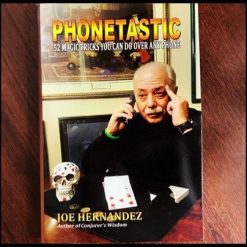 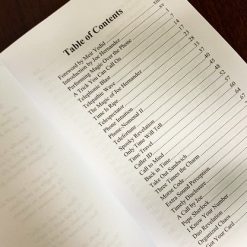 52 Magic Tricks You Can Do Over Any Phone

Phonetastic is a collection of fifty-two magic tricks you can perform over any phone. With the cell phone as the number one means of instant communication, performing magic over the phone is an excellent avenue for magician, especially since it is so easy to entertain more than one person by turning on the speaker on the phone or performing virtually. In an instant, you can have an audience.

Imagine having a card secretly selected, placed back in the deck, then shuffled, and you reveal the chosen card. You can also have a pair of imaginary dice rolled and be able to tell the chosen number. There is even a gambling routine where the spectator deals himself the winning hand without realizing it. Included is a revised bonus trick from the legendary John Scarne
br>Included is the introduction to the JDH Principle, a new magic method that is being revealed for the first time. Keep this book handy whenever you need to call a friend, family member, business client, or sell yourself on getting hired for your next gig. You will quickly develop a reputation for being a genuinely great magician.

“Joe called me and performed a time clock routine. It fooled me badly. I felt like my head was going to explode. I had to take ten Tylenol.” – Will Fern

“Every once in a while, you run across a gem or two that makes you smile when you perform them. Here’s a book just brimming with such treasures!” – Darryl V. Harris

“Joe has created a fantastic collection of effects in this book that will completely blow your mind! Whether performing over the phone or on the internet, you will mystify your spectators and give them something to talk about for a long time. I highly recommend it.” – Mike Spade

“Over a few weeks, Joe called me and performed several of his phone routines. They were so devious and entertaining that I was mystified each time. It will be great to have some of these effects in my arsenal.” – Frank Reyes