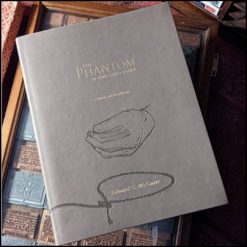 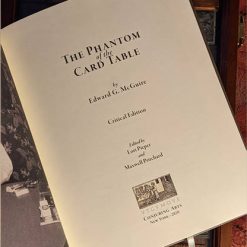 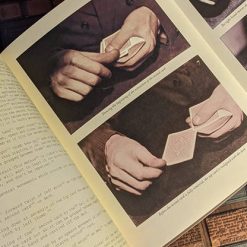 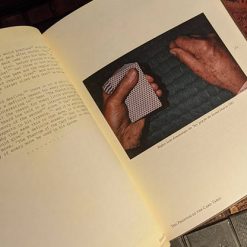 The Phantom of the Card Table was originally a typescript that was written and circulated by Edward McGuire at the end of 1930 through about 1932. This became an instant underground classic and all the prominent card men of that time, including Dai Vernon, were entranced by it.

The reason this little typescript was sought after was its subject, Walter Scott. In the summer of 1930, Scott and McGuire traveled to New York City and held a very private exhibition of what was then and should be now considered to be the greatest sleight of hand ever done! Scott allowed the other magicians to shuffle their own deck and give it to him and he could still deal out winning hands of cards. This completely fooled those who witnessed it that summer. One of the few invited to see this master was Cardini, who exclaimed after seeing Scott, “Scott is 500 years ahead of Erdnase!” Once the two men met they became lifelong friends and Cardini, naturally, wanted to learn the work Scott was doing. This desire led to Eddie McGuire writing down what Walter told him and sending it in a number of letters to Cardini. Some of these letters (not all) would later be collected in part by McGuire and offered for sale to select magicians who had heard of the now legendary Walter Scott. The later typescripts McGuire sold were not illustrated in any way and did not reveal all the information that had been sent to Cardini. Cardini’s copy had hand-drawn illustrations of some elements of Scott’s work and it also contained a very nice section (never before published) of answers to questions that Dai Vernon was asking of Scott. To further make Cardini’s copy special, Cardini, who was an amateur photographer, convinced Scott to sit for some photos of the work being done. We believe these were taken for Cardini’s sole and personal use, and these amazing photos are published here for the first time and make this work much more approachable.

Now you can own this never before published typescript with additional materials and Cardini’s original 1930s photos. This wonderful material is augmented by other articles most of which have never been published and photos of Scott and others in private meetings, also of which have never before been published. We have also gone to great lengths to make this a critical edition by having Lori Pieper and Maxwell Pritchard painstakingly go through several other known typescripts and published versions and making over 1300 critical notes letting the careful reader understand what is different in this version versus other later versions that exist.

This wonderful book was designed and laid out by Stephen Minch and was offset printed on archival natural stock in full color and with sewn signatures. We chose to use an 8 1/2 x 11′ format so that the student can easily lay the book flat during study. We have also put the step by step photos taken by Cardini on two fold-out page so that they can all be seen at once and be used while the text is open as well. We also used a very supple leather feel material that is both blind burnished as well as foil stamped. And we even put in a ribbon so you can keep your place during your studies.

Don’t miss this opportunity to get what we believe will be the greatest, most complete, and most beautiful edition of this work ever printed.