Wonders and The Conference Illusions 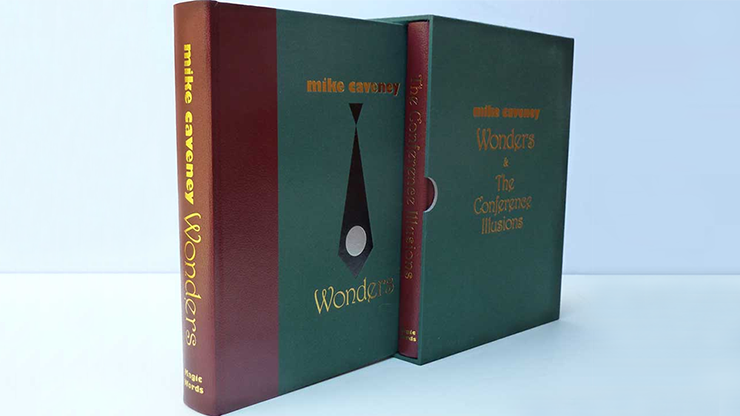 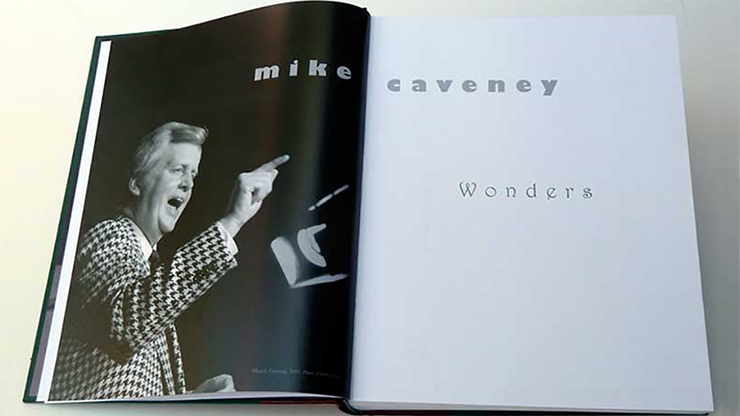 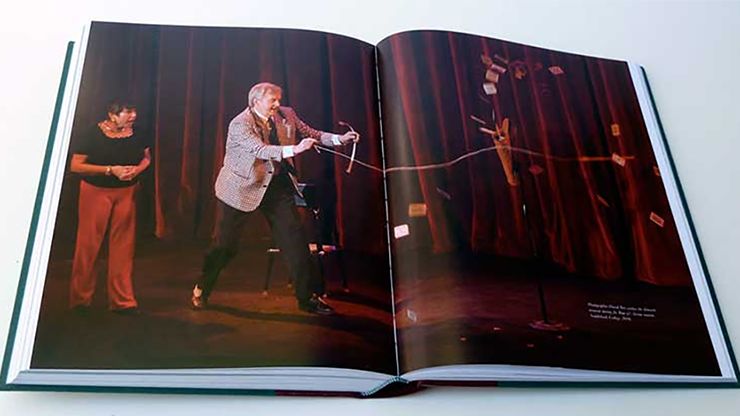 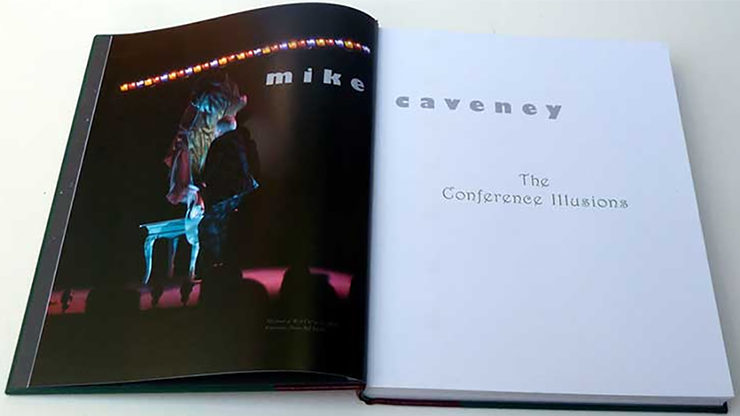 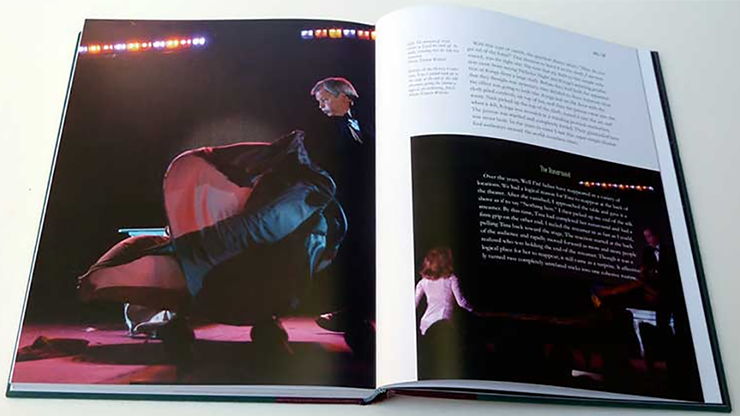 For the past five years Mike Caveney has been working on a set of books that document basically everything he has performed during his career. When he started he had no idea that the finished product would fill 700 pages over two volumes. As a long time collector of books and because this will be Caveney’s legacy, he decided to make the finished product as nice as he possibly could. And now that they are finished and they are everything he had hoped for.

Caveney knew that he could write up the methods, theories, history and funny stories about each routine but he also knew that illustrating them would be a problem. That’s when his long time friend and Hollywood special effects man, Bill Taylor, came to the rescue. Bill turned Caveney’s basement into a photo studio and for fourteen months they shot pictures. Many hundreds of them made it into the finished books and they are the clearest explanatory photos he has ever seen in a magic book. Because both of these books are printed in full color, each tiny detail is visible.

Volume I is called Mike Caveney Wonders and it contains all of the routines that he has performed going back to his days as a teenage magician in the Long Beach Mystics right up to his current act that includes Magic Paper, The Bow & Arrow and Scissors, Coat, Silverware & Chicken. More than just a How-To book, Caveney describes the creative process behind each routine. In the case of Magic Paper (the torn, restored and animated toilet paper) he explains all five methods that he has used and why each one was discarded in favor of a new version and why he stuck with method five for nearly thirty years. The goal is to teach and encourage the readers how to create their own original routines. A peek at the table of contents reveals the variety of material.

Volume II is called The Conference Illusions and it is a completely different type of book. During the past twenty-two years Mike Caveney has recreated a number of long-forgotten tricks and illusions for the Los Angeles Conference on Magic History and each one posed its own unique challenges. In some instances he had the original apparatus that once belonged to Howard Thurston or Charles Carter and other times the equipment had to be built from scratch. The book chronicles the research into the history of the illusion, the original routines, how he attempted to improve the mechanics of the apparatus, re- think the presentation and design a routine that was suitable for a modern audience. After their debut performance at the History Conference a number of these effects were presented dozens of times for lay audiences at the Magic Castle and were found to be highly effective a hundred or more years after their creation. Each chapter includes vintage photographs and posters from the files of the Egyptian Hall Museum as well as behind-the-scenes and action photos or the performances. Few readers will add any of these mysteries to their acts but there is much to be learned from studying ideas that were created by the greatest minds from magic’s Golden Age.

“Your books arrived today and I’ve not been able to put them down! The only way i can describe your books is pure beauty.”
– Al Rudge

“As a fellow bibliophile I love books that show how much the publisher cares about the material. Your books set a new standard.”
– Samuel Lamerson

“[Your books] are a magnificent achievement in every respect. Congratulations.”
– Stephen Minch

“Mr. Caveney’s new ‘Wonders & The Conference Illusions’ is truly astonishing. This is magic at its very best: wonderfully-crafted, thought- provoking material in a set that’s simply stunning. This is one of those very rare occasions in magic in which the material in question far exceeded my expectations. I really can’t recommend this set of books highly enough — it’s an absolute must-have for anyone who takes the art of magic seriously. Period.”
– Daniel Ulin

“This is one of the most enlightening, amusing, and useful books on magic I have ever read, and I’ve read quite a few. The advice and insights in the book are valuable to anyone who performs any kind of magic anywhere and even infrequently. These bits of advice and insights are delivered in a non-pompous fashion, which matches the good humor with which the book is written. Magic books are not known for their laugh-out-loud humor but I found myself literally laughing out loud on more than one occasion while reading the books. So congratulations on writing a classic book, containing not just the story of your journey through magic and some of the people you met, not just a record of your attempts at perfecting the tricks you perform, but providing inspiration to try and make magic itself, which you so dearly love, better — perhaps even to make it art.”
Matt Field

“I’ve spent half a day with your new books, and to state the obvious: You have done a glorious thing. The thought, skill, good taste, and joy that radiate from your efforts is palpable.”
– David Regal

“Superb in every aspect of content and production. Congratulations on a phenomenal job. I have sent out the good news on Twitter/Facebook.”
– Paul Daniels

“I picked up the books from the PO Box on the way in to work this morning. Now it’s two o’clock and I haven’t done a single productive thing all day. If my boss finds out and gets mad, I’m giving him your number.”
– Bill Mullins

“Initially, the price gave me pause but only for a few seconds. I remembered that every book I bought from Mike Caveney’s Magic Words was a first- class production in every respect. This set hit that mark and then set the bar even higher. Remarkable work, Mike, truly impressive. Congratulations!”
– Lindsay Smith

“The books are absolutely fantastic. What a trip to learn more about the illusions you recreated for the LA Conference. The descriptions and photos of your magic are superb!”
– Bruce Averbook

“If you want to know more about how to construct brilliant magic and routines, you must get Mike’s new books! Few people in the world understand magic the way the Cave does.”
– John Carney

“It is wonderful to read about the routining and details that goes in to every bit. It will take me a long time to go through everything, but that is just a joy.”
– Lars-Peter Loeld

“They are two of the most beautifully produced books I have had the pleasure of owning even taking into consideration your other productions.”
– Tony Griffith

“Your books are delicious to our eyes and magical to our souls. So beautiful, so perfect. It is a piece of art.”
Vanessa Vianna

“Thanks for blowing my mind! Your Wonders set of books is phenomenal. Simply beautiful!”
– Doug Scheer

“I rank these volumes with Hoffman, Vernon, Baker, Germain, Harbin, Jarrett, and Steinmeyer. They are completely innocent of any kind of bullshit. You put into print in easy-to-follow language everything I need to understand the material. You tell great stories. You make me laugh. You think deeply, wisely, wittily about magic. These books are rich in important ideas and suffused with a profound love of (and respect for) the art. They inspire me.”
Teller

“These books are breathtaking. Outstanding work, The quality is a caliber I’ve never experienced.
Gerry Snow