The Secret Life of Houdini

Handcuff King. Escape Artist. International Superstar. Since his death eighty years ago, Harry Houdini’s life has been chronicled in books, in film, and on television. Now, in this groundbreaking biography, renowned magic expert William Kalush and best-selling writer Larry Sloman team up to find the man behind the myth. Drawing from millions of pages of research, they describe in vivid detail the passions that drove Houdini to perform ever-more-dangerous feats, his secret life as a spy, and a pernicious plot to subvert his legacy.

After years of struggling on the dime museum circuit, Harry Houdini got a break that put him on the front page of a Chicago newspaper. He never looked back. Soon Houdini was performing for royalty, commanding vast sums, and exploring the new power of Hollywood to expand on his legend.

At a time when spy agencies frequently co-opted amateurs, Houdini went to London and developed a relationship with a man who would run MI-5. For the next several years, the world’s most famous magician traveled to Germany and Russia and routinely reported his findings.

After World War I was successfully concluded, Houdini embarked on a battle of his own. He created a group of disguised field operatives to infiltrate the seamy world of fake spirit mediums. In doing so, Houdini triggered the wrath of fanatical Spiritualists, led by the esteemed British author Sir Arthur Conan Doyle. Death threats became an everyday occurrence, but the group would pose an even greater danger to Houdini’s legacy.

Rigorously researched, and as exciting as a good thriller, The Secret Life of Houdini traces the arc of the master magician’s life from desperate poverty to worldwide legend, initiating the reader along the way into the arcane world of professional magic. In this remarkable book, Kalush and Sloman decode a life based on deception, providing an intimate and riveting portrayal of Houdini, the man and the legend. 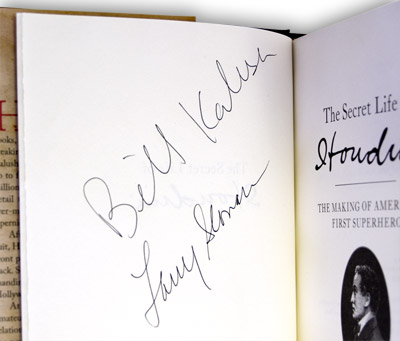