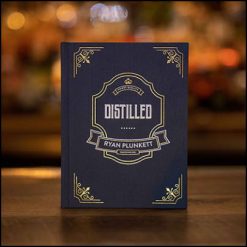 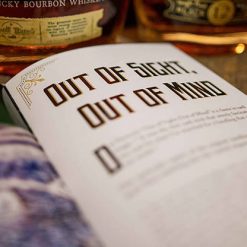 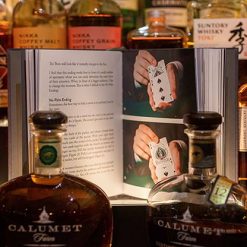 Distilled is a stunning collection of practical, professional effects plucked directly from the working repertoire of Ryan Plunkett, the resident magician at the famous Chicago Magic Lounge. Like a fine whiskey, this remarkable array of effects has been slowly distilled and refined across real-world performances for sold-out audiences six nights a week.

Filled with over 300 gorgeous photographs across 200 pages of step-by-step instruction, Distilled is a collection worthy of careful study. As noted in the foreword by legendary Magic Castle performer Mike Pisciotta, Ryan has worked diligently to polish this material over time and ensure every detail is accounted for. As a result, these masterfully constructed routines can be immediately inserted into any close-up magic or parlor magic show.

Distilled includes Ryan’s unique versions of classic effects such as his ACAAN-style routine known as “Any Card at Our Numbers” or “Paper and Silk,” his cards-through-silk routine. He also flashes his creativity with more radical departures like “Fan Mail,” a fantastic lesson in great act construction where a selected card ends up matching a card sealed in a piece of fan mail, and “Gravity Deck,” a surreal appearance and disappearance of a deck of cards that the spectator can actually feel in their hands.

Any Card at Our Numbers : Two decks begin on the table. One is chosen by a spectator then shuffled thoroughly, while the other is isolated under another spectator’s hand. Two numbers are freely named. Despite nearly impossible odds, the same card is found in both decks at the named position.

Fan Mail : This unique effect can span across the course of your show. A randomly chosen card from a red deck is shown to match a card given away earlier from a blue deck, which is concealed inside a piece of fan mail. It’s funny, amazing, and teaches many valuable lessons about constructing an act.

Ace on Top : The Ace through Five of a named suit are placed in order, then rearranged. Despite repeatedly changing the sequence, the order always remains the same. With several phases, this routine has a lovely build and displays Ryan’s knack for crafting elegant, impactful card magic.

Magnetic Silver : In this multi-phase routine, you cause two coins to apparently become magnetized, attracting to and repelling away from each other.

The Time Machine : This is Ryan’s handling of a classic plot in which you cause a deck of cards to go back in time, step by step.

Out of Sight, Out of Mind : Ryan has performed and explored this Dai Vernon classic for many years. While there are many variations already in print, in this version, every moment and subtlety has been considered in order to achieve a real piece of wonder.

Versatile Transport : This approach to the Slow Motion Bill Transpo allows for the use of any borrowed bill. It’s a pocket-sized miracle that you’ll be able to do anywhere.

Paper and Silk : Ryan has breathed new life into the classic Cards Through Handkerchief. Justifying the use of the handkerchief to make the deck “sleight of hand proof,” the audience is left convinced that the cards were never touched by the magician. Even so, the card penetrates the cloth with ease.

Muck Off : The magician demonstrates a classic way to cheat at cards: hiding cards in the sleeve and switching them into play. The magician then grants this skill to the spectator, with a card on the table switching with a card in the spectator’s sleeve. Combined with a logical kicker, Ryan has created a routine that will challenge even the most attentive audience.

Gravity Deck : The most unusual effect in the book. Placing a deck of cards on the spectator’s hand, they slowly feel the box becoming lighter. They feel the deck vanish, bit by bit until you display the box to be completely empty. You then cause the cards to reappear inside the box. This highly original effect is as clever as it is deceptive.