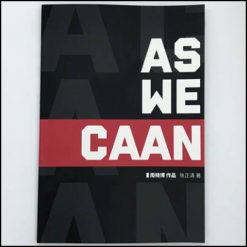 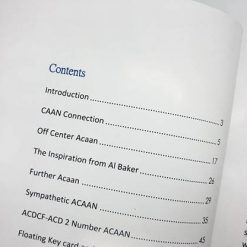 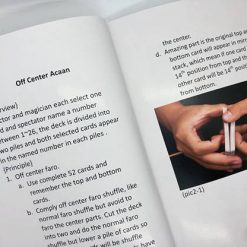 A brief introduction to the entire book’s moves:

« CAAN Connection » : A novel way of prophecy, the final ending echoes the effect of ACAAN.

This ACAAN has a strong sense of ritual and is suitable for acting on larger occasions.

« Off Center ACAAN » – One of the more powerful effects of the Off Center Faro technique is a bit more difficult in this book, but the effect is also quite a burst. Think about it. You can shuffle one or two cards to your desired position at any time, is a very practical and powerful weapon.

« Further ACAAN » – The Al Baker process was improved to reduce unnecessary and unnecessary operations, and this progressive effect was designed.

« 2 Decks Transportation ACAAN » – The audience signs a card and says a number, and the signed card appears at the position of the number said by the audience of the other deck. One of the sadistic tricks in this book, the signature version of ACAAN, is a very practical and clever method.

« Albert 2n ACAAN » – The performer borrows the audience’s cards and completes the ACAAN when the audience is shuffled throughout and the performer does not touch the cards. The principle used in this process is Albert 2 (nth power) Principle, which is one of the most preferred principles in my book, because if you play right, it can really achieve « invisible » control of the card.

JASC ACAAN – The audience shuffled, and the audience said a number. The performer asked the audience to choose a card after the show. The audience remembered this card and inserted it back into the card, and this card happened to be the number said by the audience. This trick fully shows that some brain hole techniques can also achieve very good results.

Adventures of 51 Magicians and a Fakir